How did I spend 5 days in San Carlos de Bariloche, Argentina, the chocolate capitol of Argentina? Hanging with friends, eating chocolate, and……trekking, of course!

Bariloche is only a short, 2-hour, bus ride from El Bolson, Argentina (see previous post). It’s a large town (population 108,000+) located in the lakes district. It’s a destination for tourists and locals given its variety of restaurants, bars, and shops, including numerous chocolate shops, and given its location on the shores of Lago Nahuel Huapi, and its proximity to the mountains which offer skiing, trekking, and climbing.

Once in town, I met up with Dave (England), who I’d been traveling with for the previous two weeks in El Bolson and El Chalten. He’d taken an earlier bus from El Bolson. We enjoyed a very tasty, FREE spaghetti dinner at our hostel (small joys!) then met Kim (US) and Shawna (Canada) at a nearby bar. I’d met Kim at my hostel in Punta Arenas, Chile, in early March. I’d run into her and her friend, Shawna, while waiting for the bus into downtown Bariloche. The four of us met up that night for a few Argentinean beers.

The next day Dave and I changed hostels since the one were at was booked for the night and to join my friends, Carrie, Candice, and Don who I’d trekked and hung out with in Ushuaia (at the tip of Argentina) in February (just before my Antarctica trip). Once settled, Dave and I walked around town and discovered we’d totally lucked out because we happened to be in the chocolate capitol of Argentina for Easter weekend! Every year, to celebrate Easter, various chocolate producers send their students to Bariloche to construct the world’s largest handmade chocolate Easter egg which is cracked apart Easter Sunday and shared with the crowd. Per the internet, this year…”The giant egg fed 50,000 people and was made from 8,000 kilograms of chocolate. The titanic Easter treat stood eight and a half metres high and was six feet across in diameter.” They also construct the world’s longest chocolate bar, spanning two blocks of the main street, which is also shared with crowd. In addition to chocolate-mania, the weekend’s festivities included live music and performances all day Friday and Saturday.

Wow! All of this happening AND there was good trekking nearby. I wanted to eat chocolate (with good red wine, of course) AND go trekking but my time was limited. So, after much deliberation over a few beers, Dave and I devised a plan:  we’d trek for two long days then return to town in time to enjoy the Easter festivities. Later that day, the Ushuaia crew finally showed up at the hostel. It was so great to see them! Candice and Don planned to leave the next day but Carrie was staying in Bariloche for several days so decided to trek with us.

On Day 1 of our trek in Parque Nacional Nahuel Huapi, we woke up super early for the 30-minute bus ride to the trailhead. We planned to hike ~13 mi (20.5 km) to Refugio San Martin. The first part of the trail was along Arroyo Van Titter, so we had lovely views of the river as well as Lago Guiterrez, just south of us. We headed gradually uphill to arrive at Refugio Frey, a wood/stone cabin (similar to those I described in my post about El Bolson, Chile) located on the shores of a glacial lake surrounded by mountains. We watched some climbers make their way up the vertical wall of a nearby spire while we ate. After lunch, we climbed up and over two passes to finally arrive at Refugio San Martin, another wood/stone cabin on the shores of a glacial lake surrounded by mountains. Such gorgeous scenery! And thank goodness because it made it easier to deal with the rain that had begun as we arrived. There was no shelter for the tent campers and cooking in the refugio was not allowed, so we cooked our dinner in the rain then went inside to eat. As we sat there eating our backpacker food (i.e., a cheap packet of soup with pasta), everyone else enjoyed a beautiful-looking paella made by the refugio staff. We didn’t reserve and pay for a meal at the refugio ahead of time, so no paella for us! Oh well, a least we were warm and dry. We began Day 2 by packing up wet tents and starting the roughly 10-mi (16.5-km) hike back in soggy weather. We hiked down a gorgeous valley along Arroyo Casa de Piedra. The trail was steep for the first few hours then became a more gradual descent. Once at the end of the trail, we still a ways to go to get to the bus stop. After ~2 hrs of walking in the heat and dust, we finally caught the bus back to town.

Back at the hostel, we ran into Candice! She’d decided to stay in town for the Easter festivities. So, after a few hours to clean up and rest, Dave, Carrie, Mathieu (France), who’d we’d met at the hostel, and I went to the main plaza to met up with Candice and check out some live music. We didn’t find Candice but the four of us had fun listening to the Argentinean band (who’s name I can’t recall) then having a few beers at a nearby bar. The town was crowded but the vibe was festive and fun. Most of the crowd appeared to be Argentinean and Chilean. The next day was Easter so, Dave, Carrie, Coullaud, and I headed to the main plaza again to taste a piece of the world’s largest chocolate Easter egg. It was only 9am but everyone was out to enjoy a clear, sunny Easter day. The line for chocolate spanned several blocks along the main street, around the corner, down two blocks, around another corner, then along several more blocks along the waterfront. It was a long line. After a while, Coullaud left to go trekking but Candice joined us. During the wait, we chatted, did some good people-watching, and had some matte (traditional Argentinean tea) with our neighbors in line. After an hour and a half, we were rewarded with a large carton of chocolate which we ate sitting under a tree in the plaza. Honestly, the chocolate wasn’t that great (very sugary) but getting it was part of a fun day hanging with great friends and a great end to a fun time in Bariloche!

Here are a few pictures. Click the link to see the full photo album:  https://goo.gl/photos/zAxuEcfb8NLhRmDZ7 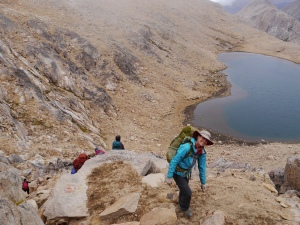 On the way to Refugio San Martin. 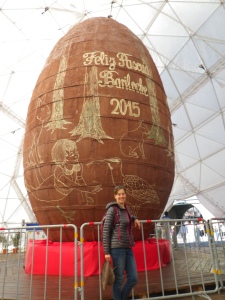