After staying put for almost 6 weeks in Cochabamba, Bolivia (see previous post), it was time to hit the road to Uyuni, Bolivia, about 13 hours southwest of Cochabamba via Potosi. Coincidentally, Magda’s sisters, Celia and Kathia, were heading to Potosi the same night. So, I had an enjoyable overnight bus ride with friends. After another 5-hour bus, I arrived in Uyuni (population 10,500+), the gateway to the Salar de Uyuni, the world’s largest salt flat at 4,086 square miles. Besides being massive, the salt flats are also high, with an elevation of 11,995 ft (3,656 meters).

According to Wikipedia, “The Salar was formed as a result of transformations between several prehistoric lakes. It is covered by a few meters of salt crust, which has an extraordinary flatness with the average altitude variations within one meter over the entire area of the Salar. The crust serves as a source of salt and covers a pool of brine, which is exceptionally rich in lithium. It contains 50 to 70% of the world’s lithium reserves, which is in the process of being extracted. The large area, clear skies, and the exceptional flatness of the surface make the Salar an ideal object for calibrating the altimeters of Earth observation satellites.” The area also serves as a major breeding ground for flamingos (Chilean, Andean, and James’). Super cool place.

So how did I spend three days on the Salar de Uyuni? Checking out the world’s largest salt flats of course! I took an organized 3-day tour with Morgane (Switzerland) and Yoann (France), who’d I’d met at the bus station in Potosi, and Camilla (Sweden), Fredrik (Sweden), and Vince (Canada) who were part of our tour group.

The morning of our tour was cold, windy, and cloudy. Not the best weather to visit the salt flats, at least that’s what we thought. While it did snow on us for the first part of the day, it stopped by the time we reached the flats, allowing us to take fun perspective pictures that the flats are renowned for. Besides perspective pictures, the flats are also renowned for amazing reflection pictures only possible when a thin layer of water covers the area. As luck would have it, the snow melted and we were also able to take some amazing reflection pictures. Cheers to crazy weather!

Besides the salt flats, the other gems of the tour (for me) included exploring Incahuasi Island (fish island), a 61-acre island formed on top of an ancient volcano covered by giant cactus; visiting gorgeous mineral-laden lagoons of various colors; seeing pink flamingos; soaking in hot springs, staying in a hotel made entirely of salt, and driving through valleys surrounded by snow-covered mountains. The tour was even more special because of the fun group I shared it with. The six of us spent the entire three days together, along with our guide, touring around the Salar in a 7-passenger Land Cruiser. We had a great time learning about the history, geology, and ecology of the area from our guide, chatting, taking tons of photos, taking turns playing DJ with music from our phones/iPod, and enjoying the amazing natural wonders. It was a fun and breathtaking experience with a wonderful group of people.

Here are a few pictures. Click the link to see the full photo album:  https://goo.gl/photos/UgwGLWp6N3M8Vbrw5 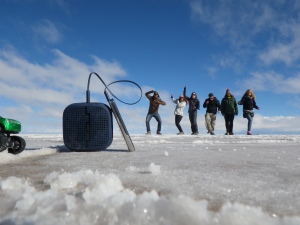 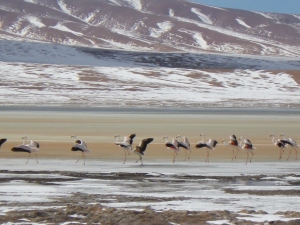