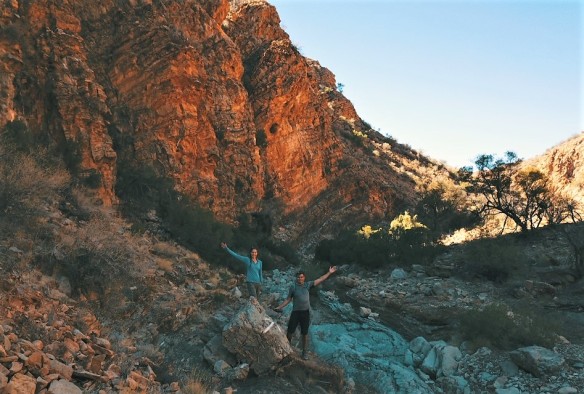 We woke up at our bush camp in a lovely dry riverbed to find our rear right tire was nearly flat, which was not totally surprising since our campsite was dotted with acacia trees and other super-thorny desert vegetation. Thankfully we were able to quickly plug the hole left by the enormous spine and continue the short distance to Naukluft Park. Like Sossusvlei, this park is part of the huge 19,216-sq mi (49,768-sq km) Namib-Naukluft National Park.

The park, located in the Naukluft Mountains, was created as a sanctuary for the Hartmann’s mountain zebra. While we didn’t see any zebra, we had a great hike up to the plateau then down into the narrow rocky canyon. This area is referred to as a “geologist’s dream” and I can understand why. We could see the various layers of orange-red sedimentary rock as we walked under the steep cliffs. Then as we rounded a corner, we came to an amazing section of layered whitish rock. The walls of this very narrow, sinuous section of canyon consisted of tufa, or waterfall limestone. It was stunning and super fun to pass over a deep rock pool using the chains anchored to the nearly vertical rock wall. Near the end of the canyon, we encountered huge boulders with amazing patterns in pink, light gray and black and others in slate gray and electric blue. It was really beautiful.

We then continued north. After about an hour on the somewhat desolate washboard road, we pulled over to investigate the source of a strange noise. We had another flat tire. This time, it was the rear left tire, and it wasn’t just low, it was shredded. Now we’d find out if we had all the necessary tire-changing gear. We were pretty sure we did, but we hadn’t actually checked. (Oops.) It took some time to locate it all but we got the spare put on and we were back on the road.

On our way to the coast, we stopped for an obligatory picture at the Tropic of Capricorn (one of the five major circles of latitude and the dividing line between the Southern Temperate Zone to the south and the tropics to the north [1]) then re-entered Namib-Naukluft National Park. This time, we drove through an area of sparsely vegetated, rocky layered hills rising up from the flat desert. It was nice to see a slightly different type of desert topography.

In Walvis Bay, the country’s second largest city (population ~62,000), we had a few beers at a local bar overlooking the ocean. It was nice to take a break from driving and hang out with the locals for a bit. For some reason, the lead singer of the two-man band playing at the bar decided Mathieu looked like a Frankie and I looked like a Sheila. So as we enjoyed the music (covers sang in Afrikaans), he periodically called out to ask how we, “Frankie and Sheila”, were doing. It was a fun stop.

We then continued along the coast to Swakopmund. While in Namibia’s third largest city (population ~44,700), we bought two new tires and had our lights repaired. The headlamps now stayed on permanently (regardless if the ignition key was in or not). The next morning, now with new tires, functioning headlamps, clean clothes, and restocked with supplies, we left our bush camp overlooking the dunes just outside the city and drove the smooth, beautifully paved road inland to visit the Spitzkoppe Mountains.

Spitzkoppe is a group of bald granite peaks over 120 million years old that stand out dramatically from the flat surrounding plains.The highest peak is ~2,200 ft (670 m). Spitzkoppe was the filming location for scenes from the movie “2001: A Space Odyssey”[2] and is now protected within a community-run conservation area that protects the geologic formations as well as ancient rock art. We had a great time climbing on the giant rock formations and enjoying the serene vibe of the area.

From there, we continued north, now entering the Kunene region. After a wonderful night bush camping at the foot of the mountains, we entered Brandberg National Monument to visit the famed “white lady” and to see Brandberg Mountain, Namibia’s highest peak at 8,442 ft (2,573 m). On our tour into the mountains, our guides, Ingrid and Celine, explained the geology, biology and history of the area. Then as we gathered in front of the 2,000- to 6,000-year old panel of bushman drawings, they explained the scene and the legend of the “white lady”, who is neither white nor a lady. After much debate over time, archaeologists now agree that the “white lady” depicts a shaman performing a ritual dance likely related to hunting. It was amazing to see how well preserved the vivid colors of many of the drawings where, especially considering they were drawn using natural products like ochre, charcoal, blood serum, and egg white.

As we continued north from Brandberg, we stopped in a small town to find a mechanic. Wily’s engine was making a strange noise as it started. Crap. The mechanic and his crew disassembled and cleaned the starter but the noise remained. They explained the cause of the noise and assured us repeatedly that it was “not a problem” so we got back on the road. That night, we found a bush camp at a natural waterhole (thanks iOverlander!). When we arrived, a safari guide and his client told us we’d just missed a herd of elephants. Darn it! I woke up several times during the night hoping (but slightly afraid) that the noises I heard outside were the elephants coming back. They didn’t return that night or the next morning but it was a great spot nonetheless.

The next day as we continued north, we saw giraffes! It just never gets old seeing these amazing animals just grazing on the side of the road. We then stopped at Ongongo Falls, a spring-fed waterfall in a small canyon surrounded by rural villages. The water level of the small fall and the pool below was low but we had a refreshing swim. And, we shared the falls with a small colony of bats. Which was cool.

We enjoyed another interesting and wonderful week in this beautiful country. I’ll let the pictures and videos illustrate the beauty and intrigue of this part of Namibia.