After exploring Bolivia’s portion of the Amazon (see previous post), I took a 4-hour bus from La Paz to Copacabana to see Bolivia’s portion of Lake Titicaca. Per Wikipedia, Titicaca (or Titiqaqa in Quechuan) is a large, deep lake in the Andes mountains on the border of Peru and Bolivia. By volume of water, it is the largest lake in South America with a surface area of 3,232 square miles. Located at 12,507 feet, and with a maximum depth of 922 feet, it is considered the highest, deepest navigable lake in the world.

So how did I spend three days on Lake Titicaca, exploring and trekking, of course.

I arrived to the small town of Copacabana (population 6,000+), on the shores of the lake, in the evening. After walking around the lively plaza for a bit, I unexpectedly ran into my friend, Mathieu (France) at my hostel. We’d met in Bariloche (Argentina) in early April. It was great to catch up with him and hear about the adventures on his motorbike journey through South America since we’d last hung out.

The next morning, I was treated to a celebration in the plaza, that based on the banners, appeared to be celebrating education. There were kids of all ages marching in the parade, as well as elegantly dressed cholitas, presumably representing the local Quechuan community. As with the parades I’d seen in other South American cities, it was colorful and lively. Later, I took a 2.5-hour ferry to Isla del Sol, the birthplace of the Incan sun god, located in the southern part of Lake Titicaca. It’s a rocky, hilly, scrubby island with lots of eucalyptus trees and no motor vehicles or paved roads. Per Wikipedia, the main economic activity of the approximately 800 families on the island is farming, with fishing and tourism augmenting the subsistence economy. The boat dropped me off at the very tiny village of Ch’allapampa (population 435) where I enjoyed sunset views of the distant snow-covered mountains across the lake. While wondering around the village, I befriended a group of three girls (Canada and Germany) whom I joined for dinner at one of the few restaurants in this village of only 5 or so blocks.

Early the next morning, I started the approximately 5-mile trek across the island from Ch’allapampa south to the village of Yumani. The trek takes you past Incan ruins and farming villages, and over the high point of the island at 13,000+ feet. While the trek is at high elevation, it’s fairly easy since, other than getting up to the high point, there’s not much elevation gain/loss. Throughout the trek, you’re treated to views across the glittering, blue lake of snow-covered Andean peaks of the Cordilera Real. Gorgeous! During the hike, I met and hiked with Paula and Gabriel (Columbia and Uruguay) who live in New York. It was nice to enjoy the 3-hour hike with new friends. The hike finished in Yumani, a larger (population 2,500), more touristy village (aka a few more hostels, restaurants, and shops). At the dock, we caught the ferry back to Copacabana, enjoying the lovey blue waters of the lake and more views of the distant mountains along the way. It was a nice way to enjoy the famous Lake Titicaca.

Here are a few pictures. Click the link for the full photo album:  https://goo.gl/photos/WWte4rHP5WtWqsT77 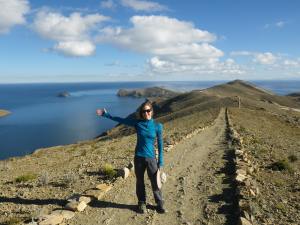 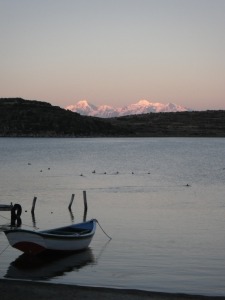 Views across Lake Titicaca of the mountains of the Cordilera Real. 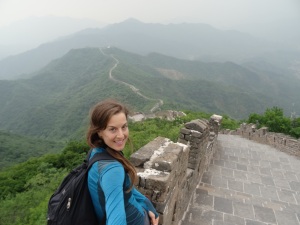 In 2018, between my travels, I realized my other passion (fitness and health) and became certified as a fitness trainer.

Please visit my Let Fit Happen website to view my health & fitness programs, get healthy living tips, and to find out how I can help you “let fit happen.” 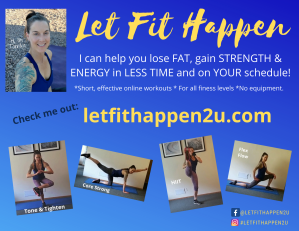